The movie “Hidden Figures” took me on a roller coaster of emotions that I am not sure I’ve come down from.  Many [many] years ago, I was a budding engineer interning at NASA’s Kennedy Space Center in Cape Canaveral, FL who later turned down an offer to work as a long term engineer there.   At that time I had no idea of the premise of being a “hidden figure” in my career.  I was naive. Hopeful.  Trusting and hanging on to every word of those in authority; predominantly  the older, white men who were my managers.

This derivation of mixed emotions comes from the simple, yet complex idea that things which are hidden are searched for intentionally, or remain hidden for a long time; only discovered by happenstance.  I honestly celebrate the healthy exposure that this movie has brought African American women in the science fields, yet my heart and life experience wrestle with the reality that any leader who chooses to unveil hidden figures in any industry must pay some cost.  It may cost some a bruised ego.   Others some of their influence.  Still others the very position that they may have aspired to or felt entitled to for years.  Truthfully, this is a cost that some are unwilling to pay.

When I re-imagine the bathroom scene where her manager tears down the “Colored Only” bathroom sign with every exertion of strength in his body, I am deeply moved.  Viscerally moved to tears.  I am moved because he had a choice.  He had a choice to leave things the way they were (which was perfectly legal) or to ensure equity for all on his staff at the expense of his social capital and the dissenting opinions of others. I won’t divulge details, but as a women of color who has experienced working on teams and with management who choose to unveil and those who don’t, I will say that I believe this act was far more courageous than depicted.  Now, before we toot too many horns, the most glaring paradox in this movie to me was that these women WERE ONLY unveiled because there was a DIRECT BENEFIT to those who had allowed them to remain hidden for so long.  In fact, the cost became too great for them not to be unveiled.  I mean, we’ve got to get John Glenn to space, right?  By the end of the movie, I joined everyone in celebrating the greater victory for America, but I could only think, the managers cowered because they had to; because they wanted victory so badly.  They DID NOT do the right thing simply because it was the right thing to do.

I want to honor Martin Luther King, Jr. as we near the end of another #BlackHistoryMonth and highlight the response of Dorothy Vaughan, Octavia Spencer’s character,  who in fact did the right thing because it was the right thing to do. 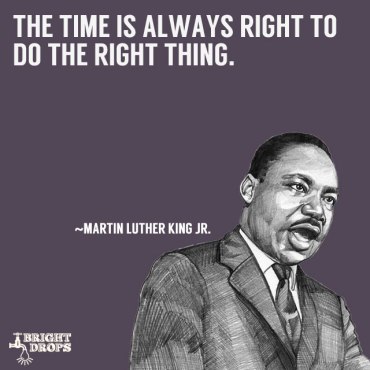 Leaders who Do the Right Thing (as reflected in Octavia’s charachter) are marked by:

There are hidden figures in classrooms, colleges, and places of employment everywhere.  Many systems in society have given visibility to some and not others.

Today, I am less of a hidden figure.  Still being unveiled and grateful for it.

One day, I hope it is said of me that I “did the right thing” as a leader; a person of influence.  I understand that I have a beautiful choice.  I will choose to unveil hidden figures when presented with the opportunity. Who will you help unveil today?

I am a proud southerner turned foodie who loves people more than I love good food and a good read. I candidly share my predilections [bias, leaning, weakness & predisposition] on this blog. View more posts

Recipes and tips on eating a no-fuss, plant-based diet for better health.

Everything but laundry and groceries.

A Practical Look at the Job Search, LinkedIn, and Introverts

Sharing my voice with the world

Predilection - bias, leaning, weakness, liking, predisposition. We all have them. These are mine.

Diary of A Run Away Civil Rights Lawyer

For a Brave Sparrow

A Journey Into Christianity By An Ex-Atheist

Conformed to be Transformed
EUGENE CHO

love is more than words

The latest news on WordPress.com and the WordPress community.